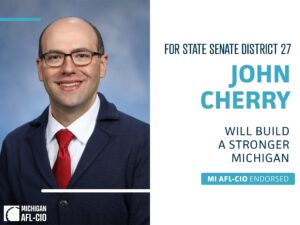 The Michigan AFL-CIO has endorsed John Cherry in his campaign to be State Senator in the 27th district. The mission of the AFL-CIO is to improve lives of working families, bring economic justice to the workplace, as well as social justice to our state and nation. Michigan AFL-CIO supports the rights of workers to join and form unions. By exercising their collective voice, ordinary people bargain to improve their living conditions, working conditions and communities.

John Cherry said, “I am a former member of SEIU and UFCW. My parents have both been union members, my grandparents were union members, my cousins are union members. For me, these unions don’t just represent better wages and working conditions. Our unions represent a better community; one where we all work together for the betterment of our citizens.  Thank you to the many current and retired AFL-CIO members of Michigan for your continued belief in my ability to represent you as Senator in the 27th State Senate District.”