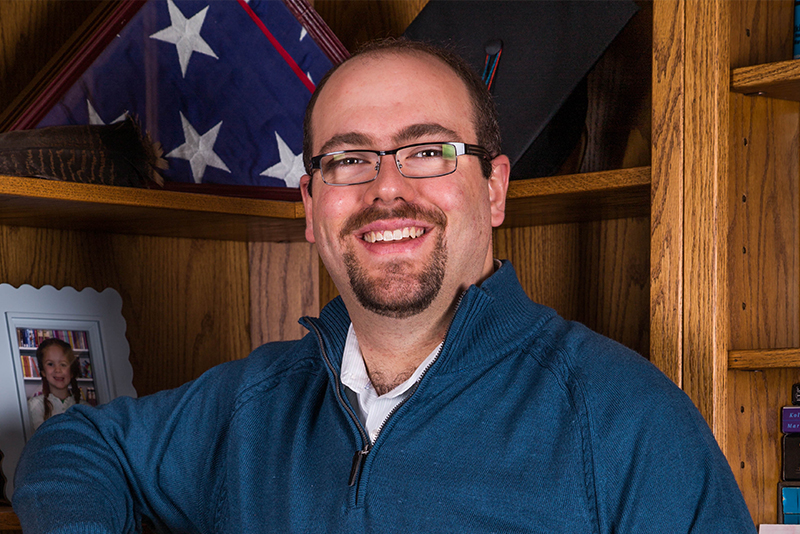 John Cherry, the son of Representative Pam Faris and Lt. Governor John Darrell Cherry Jr., was born in Clio, Michigan and raised in Vienna Township.  He lives in Flint, Michigan and is married to Teresa Villacorta. They have a child, Diana Cherry.

John grew up in a politically active environment, participating in campaigns for friends and family from a young age. John’s childhood memories are populated with time at UAW halls, fishing with his grandfather, a 659 retiree, hunting with his father, and attending U of M football games. John, Teresa and Diana continue the outdoors tradition spending time hiking, hunting , and fishing whenever possible.

After his high school graduation from The Valley School in 2003, John attended college at the University of Michigan – Ann Arbor. While initially studying history, he changed direction to pursue a degree from the School of Natural Resources to match his love of the outdoors. After earning his bachelor’s degree, he continued his education at the Gerald Ford School of Public Policy at the University of Michigan, earning a Master of Public Policy in 2009.

After graduating from the University of Michigan, John moved back to Flint, Michigan and began working at the Michigan Department of Natural Resources (DNR) Office of Science and Policy. Later he moved to the DNR’s grants management staff and was promoted to the Department’s performance management coordinator in 2011.

When John moved back to Flint he became active in civic life becoming Secretary of the College Cultural Neighborhood Association, participating in neighborhood committees and on an advisory committee of the Flint Master Plan.

In 2012 John married his wife, Teresa Villacorta. Shortly thereafter they created their own business to improve the prices received by Teresa’s parents, who are small coffee farmers in the Peruvian Amazon. Flint Coffee Company was born. Today they arrange importation of the family’s coffee and roast it in Flint for sale to local grocery stores, restaurants, cafes, and on their website.

The City of Flint voters elected to undertake a charter revision in the 2014 general election, triggering the election of a charter commission in May 2015. John was concerned about the direction of the City and ran for the commission, receiving the most votes amongst the 13 candidates. During the Charter revision process John served as vice-chair of the commission.

The newly drafted charter was approved by a nearly 2-1 vote by City of Flint voters in August of 2017, completing the work of the charter commission. The new charter put in place strong ethics standards, improved budgetary protocols, increased the accountability of City government, and the ability of citizens to participate in government.