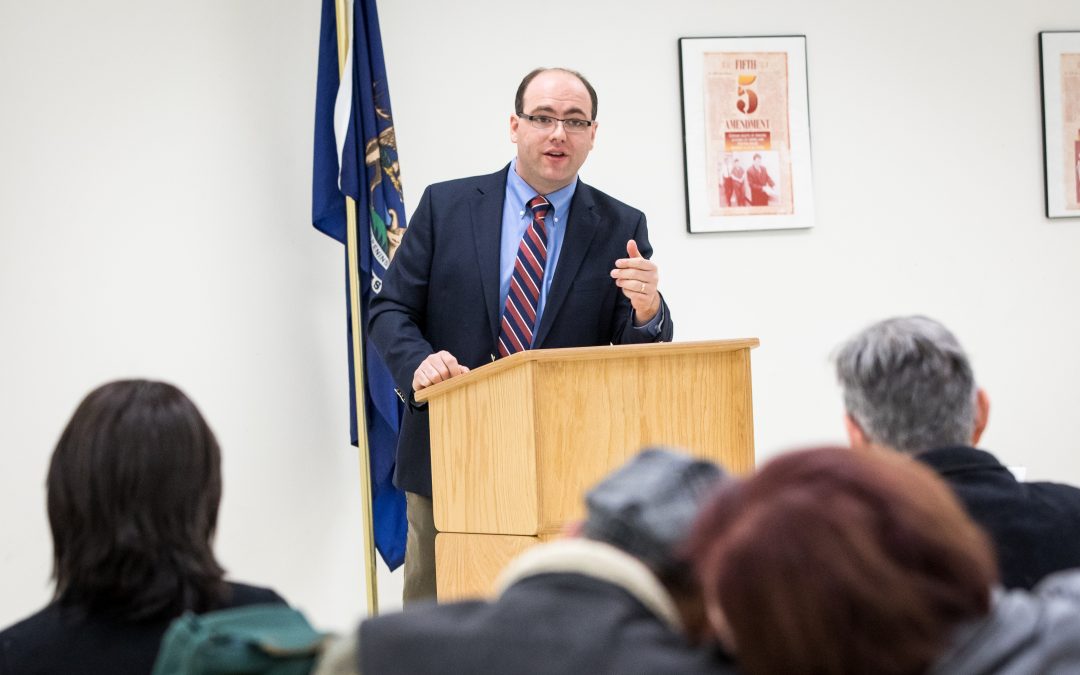 Thank you all for attending today, and thank you to the men and women of the Pipefitters Local 370 for letting us gather in your hall.

I’m going to start out today by saying something that you don’t hear very much anymore. I am blessed to have been born in Genesee County and to have a family that raised me here. It is true that those from Silicon Valley or Manhattan may have a better shot at wealth, but there is something else that Genesee County does better than anywhere else – it produces people who care about their brothers and sisters. That’s why Flint and Genesee County were the birthplace of the middle class. Because our grandparents and great grandparents were willing to sacrifice for each other to make a better tomorrow. We see that in our community’s decision to create programs like the Genesee Health Plan, to provide healthcare to those who need it. We also see that in the local response to the Flint Water Crisis with folks from across the community volunteering to provide water and 300 union plumbers stepping up to go door-to-door replacing fixtures . This commitment to each other is the necessary foundation of democratic government – public service. Without genuine public service democracy does not work.

Dedication to public service amongst elected leaders was key in the struggles that created the middle class. When Michigan Governor Frank Murphy was pressured by all the experts or “thought leaders” to use the government’s authority against the ‘37 sit-down strikers he told a friend, “I won’t go down in history as Bloody Murphy”. Instead he authorized relief payments to strikers. Vice-President John Nance Garner pressured President Roosevelt to use force against sit-downers. He later said it was the hottest argument they ever had. But FDR and Governor Murphy were public servants who knew it was their job to protect the citizens they represented. I grew up listening to the speeches of Dale Kildee, and I am sure that many of you have heard them too. He often described the role of government and public servants as the protection of  the dignity and integrity of each individual. He was right.

Today we are in a different place than we were yesterday. Dignity and public service are no longer the common theme amongst many politicians. As they have set aside concern for our citizens, it has resulted in crumbling infrastructure, failing schools, hatred between brothers and sisters, and reduced prosperity. Just as Flint and Genesee County were the birthplace of the middle class we reflect the deep crisis the middle class faces today. We saw first hand in the Flint Water Crisis  what government without the spirit of public service is.

As many of you know, I have a one-year old daughter. Throughout my wife’s pregnancy and after Diana’s birth, we used bottled water since we live in the City of Flint. Yet, when she was a couple months old our doctor advised us, out of an abundance of caution and despite having no physical symptoms, to have her tested for lead. I held my infant daughter still as the nurse struggled to find the tiny vein in her arm, and I looked in her eyes as her face became wet with tears and she cried, not knowing why we were causing her such pain. A week passed before we were learned, thankfully, that Diana did not suffer from lead poisoning, and a week more before Teresa forgave me. Those are the most painful moments I have had so far as a father, yet our family is far luckier than many families affected by the water crisis. That is the face of government without a spirit of public service.

This type of government must end. We need leaders that show a genuine dedication to the public, whether or not it is easy or convenient for them. Right now we have too many leaders who are too concerned about petty games, their future career, or their personal image, and not focused on genuine public service and getting the job done for the citizens they represent.

That’s why I am running to be Michigan’s next Representative from the 49th State House district. My record reflects a genuine commitment to public service, hardwork, and problem solving. When I graduated from college I began working at the DNR, where I am a proud SEIU member. I work to give frontline employees a voice in decisions made by our department. I moved into the City of Flint where my wife and I are raising our family and where we started our business, Flint Coffee Company. When voters in Flint decided to undertake a charter revision I ran for and was elected to the Charter Commission. While working at the DNR and starting a small business, I also served as the vice-chair of the Commission which drafted a new Charter for the City of Flint which was approved by voters on a nearly 2-1 vote in August. Its focus – accountability, transparency, effectiveness and public involvement – are needed at all levels of government.

As a State Representative you will see me push for policies that help us grow a prosperous middle class – ranging from investment in infrastructure  to expansion of training and education programs. I will argue for policies that result in strong communities such as proper funding for our public schools and local governments. I believe we need to build a healthy state, that means healthcare for our citizens and addressing contamination that is a result of our industrial past. We need to work for families by implementing strong family leave requirements and ensuring seniors have the support they need to be active members of our communities.

So I am going to provide you with a little story of when my wife and I were first engaged. We were taking a little tour in the region of Cajamarca in Peru. And we saw a protest that was occurring, due to local corruption scandal of some sort which I was inquiring about. And if you read the news from Peru you will find that corruption is endemic. So she was explaining to me the reason for the protest and she tells me she hates all politicians, they are all corrupt and don’t care about anyone except for themselves. And you can imagine me sitting there getting a little uncomfortable and I say, “Honey, you know I have a lot of politicians in my family, right?” And she looks at me and says, “I know, and you don’t know how lucky you are that I like you!” Hopefully we have made a good impression the past six years. So this is all to say that you can rest assured that I go to bed every night with someone who has high expectations and won’t tolerate any selfishness or bad behavior.

Thank you for coming and thank you for your help as we try to improve the lives of every Michigander.